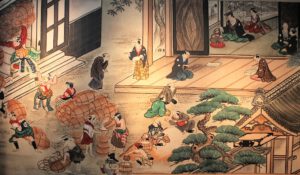 Before reading this post, please note that The Writer’s Travel Guide does not recommend travelling to Japan in the long 18th century. In all likelihood, you will not be allowed to enter the country. If you try anyway, you are committing a capital offence.
Having read this, you are still determined to give it a try? – excellent! You are of one mind with three British captains who each had an individual adventure with an island kingdom barring itself from foreign influences. And you might also find out that not all encounters have to be riddled with conflicts. END_OF_DOCUMENT_TOKEN_TO_BE_REPLACED

With regards to transportation, we often think we went from carriages to steam railways in one single step. As a matter of fact, there is a “missing link” between carriages for the road and steam railways: the horse-drawn railway. It was first used in collieries, but soon passengers were transported, too. END_OF_DOCUMENT_TOKEN_TO_BE_REPLACED One of the most proficient travel writers of the late 18th century was – a woman: Mariana Starke. Her travel guides were an essential companion for British travellers to the Continent.
Being successful didn’t make life easy for Mariana. Female writing for the public was frowned upon. From her years as budding authoress to the latest edition of her successful travel guide, she always had to deal with criticism from more conventional members of society. Unperturbed by this, she led an unusual life for a woman of her time. END_OF_DOCUMENT_TOKEN_TO_BE_REPLACED

Georg Forster was a central figure of the Enlightenment in Germany. He travelled with Captain James Cook on the second voyage (1772-1775), and was a member of the Royal Society. He also became known as the founder of modern travel writing.
In 1790, the famous scientist chose England as his destination. Young Alexander von Humboldt accompanied him, at that time a budding scientific talent.
Forster turned the impression of the trip into a book titled “Views of the Lower Rhine, from Brabant, Flanders, Holland, England, and France in April, May and June 1790”. It was published from 1791–94.

Here are some observations on Georgian England meant to amuse readers on the Continent:

END_OF_DOCUMENT_TOKEN_TO_BE_REPLACED

Lord Byron (1788 – 1824), a man of scandals, had by 1815 crowned his wild life with a stormy affair with Lady Caroline Lamb, and a breakup with his wife. He left England to travel the Continent. True to the verdict ‘mad, bad and dangerous to know´’, he didn’t led a virtuous life there. In December 1819, he arrived in Ravenna, Italy, where he took up residence to be near his mistress Teresa Guiccioli, a married woman. There was more scandal and adventure to come: Byron became involved in the national movement in Italy – meaning secret societies plotting insurrection against the Austrian und clerical rulers. Indeed it was in Ravenna that Byron found his calling in serious political activities. END_OF_DOCUMENT_TOKEN_TO_BE_REPLACED END_OF_DOCUMENT_TOKEN_TO_BE_REPLACED

“Shampooning”, a type of Turkish bath, gave full relief to ailments such as rheumatic and paralytic, gout, stiff joints, old sprains, lame legs, aches and pains in the joints”. Dean Mahomet’s business proved to be so successful that hospitals referred patients to him and he was appointed as shampooing surgeon to both King George IV and William IV. END_OF_DOCUMENT_TOKEN_TO_BE_REPLACED Here is a list of the main scandals Caroline was accused of: END_OF_DOCUMENT_TOKEN_TO_BE_REPLACED