On 25th September 1799, shortly before 5 o’clock in the morning, the Wickhams woke up by the sound of guns. Were the French marching against Zurich again? William Wickham (1761 – 1840), England’s leading spy on the Continent, placed his wife Eleonore (1763-1836) under the care of his private secretary, the Count of St. George. He himself rode out reconnoitring the situation. END_OF_DOCUMENT_TOKEN_TO_BE_REPLACED

After a ball at the Dolphin Hotel in Southampton in December 1808, Jane Austen – proficient as ever in summing up a gentleman’s potential as a spouse – noted that Corbet James D’Auvergne was both a captain in the Royal Navy and a ship owner. The remark might have been a joke about husband-hunting, but the Captain was indeed a good catch for a lady looking for hero-material in her husband. Besides, he was still single. Any lady furthering her acquaintance with him should know, however, that he had his hands in large-scale smuggling.
END_OF_DOCUMENT_TOKEN_TO_BE_REPLACED

Karl Theodor – probably inspired by his consultant, the smart Count Rumford – came up with a cunning plan: END_OF_DOCUMENT_TOKEN_TO_BE_REPLACED

The Plot of the Infernal Machine END_OF_DOCUMENT_TOKEN_TO_BE_REPLACED

Rebels knew that their mail was likely to be intercepted, so they went to great lengths to circumvent the authorities. Assuming an alias was an obvious trick. Messages between groups were conveyed face-to-face, or letters were sent by trusted couriers. In the late 1790s, it was reported that at least one dissident Irishman took secret messages from England to Ireland using a secret compartment in one of his shoes. The letter was placed in the cavity, and covered in strong paper to protect it. Then the sole of the shoe was sewn back on again. END_OF_DOCUMENT_TOKEN_TO_BE_REPLACED

END_OF_DOCUMENT_TOKEN_TO_BE_REPLACED 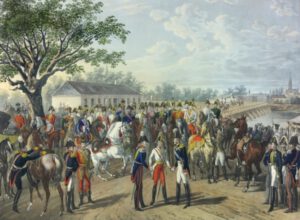 Vienna, 1814. 271,000 people live in the capital of the Austrian Empire. The city is going to host one of the major political events of the early 19th century: The Congress of Vienna. The heads of the five reigning dynasties, representatives from 216 noble families and their entourage travel to Vienna. 16.000 visitors are already arriving in September. More are to follow: plenipotentiaries, ministers, noblemen, servants, musicians, artists, merchants, fortune-hunters and card sharps.

Have a glimpse behind the scenes 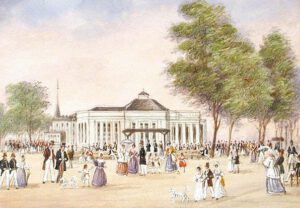 Organising the Congress is a huge task. Regency Explorer takes you behind the scenes as either the Head of the Police Ministry or the Master of Ceremonies and tells you more about the history of the Congress and the tasks that had to be fulfilled.

First, find out in which role you would have fitted best at the Congress by answering the three questions below. Count your points to get a proper result, and then read on to learn more about the challenges the real historical persons of Baron Hager, Head of the Police Ministry, and Count Trauttmansdorff, Master of Ceremonies, had to face.