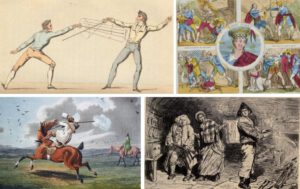 1822 is a good year for readers! Many great authors are back with their latest novels. Even better: juicy scandals add extra spice to some publishing days.

Check out my list of popular fiction and non-fiction releases. I have added links to online versions of each book, so you can actually read like its 1822!

Lord Byron is back! 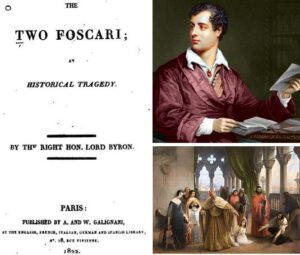 Reading in 1822 starts with Byron latest work: a tragedy, set in Venice in the mid-15th century.
The story is loosely based on the downfall of the historical doge Francesco Foscari and his son Jacopo: Jacopo, a dark character who has already been charged with corruption, and for complicity in a murder, now has to answer the capital charge of treason. In the jury is his father, Francesco. Will he sign the sentence and thus condemn his son?

The marketing of the book is accompanied by a literary scandal: Byron had added an appendix to “The Two Foscari” with an attack on the Poet Laureate, Robert Southey. Southey responds via a London newspaper, daring Byron to attack him again. Byron is tempted to challenge Southey to a duel, but writes the stinging satire “The Vision of Judgment” instead. 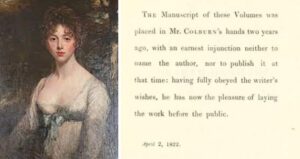 Much ado is made about the alleged secret identity of the writer, but Lady Caroline Lamb’s authorship is an open secret.  After her scandalous novel “Glenarvon”, her second book is about a parvenu who gets entrapped in the hypocritical social circle of London society. Can he find true love and happiness in life, or his he doomed?

The novel is a comparatively overt criticism of the aristocracy as capable leaders. Praise by the critics: “We have seldom derived greater pleasure from the perusal of a work of the same nature.” And: “Graham Hamilton may with justice be ranked high in the list of Modern Novels”.

An American takes on life at a British Country House

“Bracebridge Hall, or The Humorists, A Medley” by Washington Irving

Follow the American writer to a British Manor in the West Midlands, and enjoy about 50 humorous tales about the characters he met there in 1821 – including the dogs. A first-hand report and insight into a peculiar world.

Irving is among the first American authors to earn acclaim in Europe. Lord Byron, Charles Dickens, Mary Shelley, and Walter Scott are fans. “Bracebridge Hall“ was originally published under the author’s pseudonym Geoffrey Crayon. It followed Irvings famous “The Sketch Book”, but can’t boast a story even half as scary as “The Legend of Sleepy Hollow”.

“The Fortunes of Nigel” by Walter Scott

Young Scottish nobleman Nigel Olifaunt travels to London in order to ask the King to repay his father’s loan. Nigel wishes to use the money to pay off a mortgage on his estate—but the Duke of Buckingham and Prince Charles already have their eyes on it… . Nigel is drawn into the chaotic life of the court, and when he becomes an enemy of the profligate Lord Dalgarno, he finds himself in grave danger!

Take sides in a political scandal

“Napoleon in exile; or, a voice from St. Helena: the opinions and reflections of Napoleon on the most important events of his life and government, in his own words” by Barry Edward O’Meara 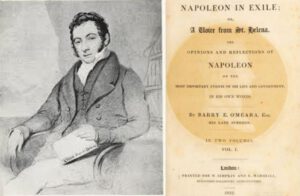 Irish surgeon Barry Edward O’Meara publishes a report about his time as physician to Napoleon in exile on Saint Helena. His accusations of the British mistreating the former archenemy are shocking – but are they true? Might he have become a minion of the charismatic ex-emperor?

The book caused a scandal: On publication day the small courtyard of the printer is mobbed, and the police has to be brought in to control the crowds.  O’Meara makes £1,350 from the sales in less than a year. Read all about it here: https://www.cairn.info/revue-napoleonica-la-revue-2013-2-page-75.htm

“Guilty or not guilty” – that is the question!

“Guilty Or Not Guilty, Or, A Lesson for Husbands: A Tale” by Ann of Swansea

A new book by the woman who was the first to have her libretto premiered on Broadway! Get it and find out if the love of a woman can redeem a rakish man!

Read “Guilty Or Not Guilty, Or, A Lesson for Husbands: A Tale” online here: https://books.google.fm/books?id=7MIVAAAAYAAJ&printsec=frontcover#v=onepage&q&f=false

Ann of Swansea (real name: Ann Julia Hatton, née Kemble) was the sister of the actors Mrs Sarah Siddons and John Philip Kemble. She was a highly intelligent writer with an excellent ear for dialogue.

The American Way of Gothic literature

This novella combines romance, murder, and elements of the supernatural! Protagonist Paul Felton progressively descends into psychopathic insanity, violence – and even murder.
Read it online here: https://books.google.de/books?id=ERURAAAAYAAJ&printsec=frontcover&hl=de#v=onepage&q=Paul%20Felton&f=false (from page 3 of vol. 2 of “The Idle Man”)

R. H. Dana eagerly embraced the new Romanticism of Coleridge and Wordsworth. He was among the first American writers to explore the genre of Gothic literature. “Paul Felton” has also been called a pioneering work of psychological realism.

Have a laugh at the parvenus

“A Cockney’s Shooting Season in Suffolk” by Henry Thomas Alken

Sporting artist Henry Alken pokes fun at new wealthy Londoners on their trip to the countryside. His engravings depict the comic pitfalls of riding that lie in wait for the inexpert who believe they can master the field sports during brief holidays.

Look at his work here: https://www.emma.cam.ac.uk/members/blog/?id=496

Betrayal, vengeance, and a notorious pirate

“The Pirate” by the author of “Waverley, Kenilworth,etc.”

Walter Scott bases his latest work roughly on the life of notorious pirate John Gow. The setting is Shetland at the end of the 17th century. The tranquillity of the community on the island is interrupted by the arrival of the shipwrecked pirate Clement Cleveland. Rescued by the local Mr. Mordaunt, the pirate soon gets into conflict with the young man when they both fall in love with Minna…

Get the grip on fencing – finally!

Forsyth laments that the British aren’t yet up to the art of fencing. Claiming to have learned fencing from the famous swordsman G. Rolando, one of the most eminent masters in Europe, he shares his knowledge in this handy pocket-sized book. It features the whole art from methods of disarming via double attacks to forced engagements.

The book is dedicated to His Royal Highness Frederick Duke of York, and it features a quote by John Locke: ‘Fencing has so many advantages in regard to health and personal appearance, that every gentleman of respectability ought to have so striking a mark of distinction´.

“The Spirit of the Lakes: Or, Mucruss Abbey: A Poem, in Three Cantos: With Explanatory Notes, from the Best and Most Approved Authorities” by Catherine Luby

Immerse yourself in the tragical catastrophe occurring to a maiden, Adeline, crossed in love. The narrative is set among the scenery of the Killarney Lakes of Ireland. The first work by the authoress pleases with the skilled description of the beauty of the landscape. The Monthly Magazine as well as the Gentleman’s Magazine praise the easy and melodious verse.

People who enjoyed the novel might also like:
“A Guide to the Lakes of Killarney” by George Newenham, published in 1822. Ireland has become fashionable for travellers in search of the picturesque, so why not setting out and discovering it for yourself?
Read it online here: https://archive.org/details/guidetolakesofki00wrig

Have your technical knowledge pick up steam! 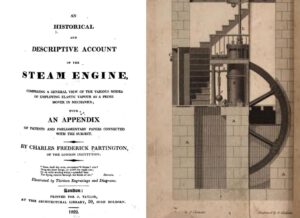 Have your knowledge about the steam-engine brushed up by one of the leading science lecturers of the age. The author takes you back in time to the 1680ies and the early steam engines. After the basics, chapter II is dedicated to the period of Messrs. Boulton and Watt. The latest improvements, including steam navigation, are described in chapter III.

If the Irish Code Duello of 1777 didn’t exist, which rules guided the handling of a duel in the late 18th Century?