I am happy to welcome back Alexander Nerá to Regency Explorer. He is the author of “Lord Mayford and the Expedition to Egypt“, a travel adventure and comedy set in 1810.
The novella started out some years ago as a fictive diary on my blog. It has now been published in both English and German. As I am interested in all things Regency and enjoy the story’s P.G. Wodehouse-style humour, I asked Alexander for an interview. Learn more about the historical context, the set of characters, and a famous 19th-century author as a source of inspiration.

Your story about Lord Mayford and the Expedition to Egypt is now available as e-book and in print format.
Yes, this endeavour has come a long way since the first parts were published on Regency Explorer.

Is that a good thing?
That’s for the readers to decide. I will share praise and blame equally with Regency Explorer.

Charming. Let’s speak about the characters: Charles Mayford. Many German readers might translate ‘Charles’ into German and drop the ‘ford’.
And might be reminded of the 19th-century author Karl May. It’s no coincidence.

So, is this a Karl May adventure story?
Not quite. I admire him and read most of his books. He is famous for many things, not least for his depiction of foreign countries. I put a lot less effort into researching 19th century Egypt than he did – and less than many of your knowledgeable readers would have wished. But Karl May has also been criticised for how he created his characters. Mostly, they are either heroes or villains. In my story, no one is really a bad person. No one is perfect, either. Everybody is just doing what makes sense to them.

Even the sheik?
Especially him. His reasoning is explained in a scene towards the end of the story. It greatly confuses Lord Doddlington, though.

Lord Doddlington! You will admit that this character is not hero material, won’t you?
Doddlington has some – let’s called it – weaknesses, but I think he tends to get underestimated. Don’t forget that he is depicted as Lord Mayford perceives him. Mayford is hardly reliable when he writes about people he has doubts about. Lord Doddlington’s point of view is often very different. You will find examples in an interview with him, which is available on the book’s web site.

You are saying that Lord Mayford and Lord Doddlington are not hero and villain, but rather opponents?
Yes. They should treat each other as partners rather than opponents, but can’t see it yet.

What about Lord Mayford’s friend – Lord Roxwell?
Ah, you got me! Roxwell of all characters is most similar to a Karl May hero. But even if you are as rich as Lord Doddlington or as experienced as Lord Mayford, you may need some help or luck every now and then. Roxwell represents this. That also means he can never be a central figure in the story.

He would be the perfect hero, you know?
I think he would be too predominant. Also, he likes to interfere just because he knows he can handle it or for his own amusement. He is not completely impeccable. In one situation, he even supports one of Doddlington’s whims.

Your pointing out Lord Roxwell’s faults will disappoint many of your female readers.
Sorry.

Mrs Starke seemed an important character at the beginning but became less important in the course of the story.
In terms of ‘screen time’, this is certainly true. On the other hand, it was one of her ideas that triggered the expedition and the story. And in one scene she takes a firm stand to keep everyone – literally – on track. We don’t see Roxwell in that situation because she doesn’t need him. She is a strong character in her own right. Anna M. Starke is not a pure invention, but inspired by –

Mariana Starke, the travel guide writer. We know – this is Regency Explorer!
Right.

Is there going to be a sequel?
Well, I am not sure yet. I have some ideas.

Can we expect to see Lord Doddlington again?
He is a renowned explorer, at least in his mind. You never know where he is going to show up.

Any new characters?
There are rumours about – as Mayford would phrase it – an impressionable young woman who idolises Mrs Starke.

Will Lord Mayford occur in the story?
Lord Mayford considers Doddlington, Mrs Starke and their followers a bunch of amateurs who are best kept at a distance. He won’t be interested.

You said, however, that Lord Roxwell likes to meddle in order to amuse himself.
Indeed. If anyone can change Mayford’s mind, it’s him. 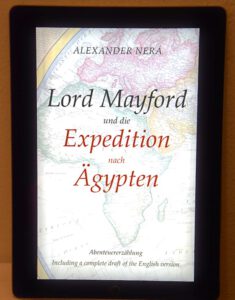