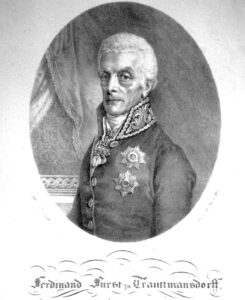 Organising balls and entertainment for the members of the Congress and providing service, food, and transportation for the guests
at the Hofburg.

You hire extra staff – 1,500 servants – for the daily routines such as emptying chamber pots, providing water for washing, doing the laundry and preparing and serving food. Managing them is a challenge in its own right. Additionally, you also have to allocate the household ressources, such as candles and firewood.

Transportation for the noble guest

The Austrian Emperor wants the high-raking guests to have coaches, grooms and horses at their disposal. You have 170 new, dark-green coaches built and emblazed with the imperial crest. Then, you provide about 1,000 white horses for the carriages, additional coachmen and grooms, and, as an extra, new livrees for the staff. On the streets of Vienna, these impressive imperial coaches always have the priority.

The Emperor wants to show-off and prove Austria’s power and wealth. Thus, only the best dishes should be used for the grand dinners. However, all gold and silver flatware had been melted down to pay for the war of 1809, and money has been tight ever since. But you find a solution, of course: You have a complete porcelain service made to look like gold tableware.

One of your masterpieces is the opening ball of the Congress on 2 October 1814. Your event location comprises two large ballrooms and the riding school, laid out with fine parquet. They are connected by alleys of potted orange trees. There are lustres, chandeliers and mirrors everywhere. People are so impressed by the glamour that they even try and count the candles. Some count 12,000 candles, others 16,000.

There are some drawbacks, though:

Would you like to know more about the job of the Head of the Police Ministry? Click here.

Zamoyski, Adam: Rites of Peace: The Fall of Napoleon and the Congress of Vienna; Harper Perennial, 2008.