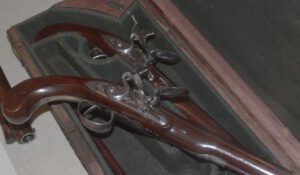 A code of honour defined rules for issuing a challenge as well as rules of engagement on the duelling ground. It regulated the conduct of seconds, and also specified which conduct would be considered dishonourable. Which rules guided duellist in the late 18th century and early 19th century? END_OF_DOCUMENT_TOKEN_TO_BE_REPLACED

Simply by its alluding name the Carlton House desk immediately catches the attention of a Regency Enthusiast. The imagination produces an exquisite piece of furniture made of exotic woods, rich in ornaments, and designed for no less a person than the Prince Regent. Though some antique dealers like to dwell on this lovely image, it is but a half-truth.

END_OF_DOCUMENT_TOKEN_TO_BE_REPLACED

Here is the second part of events related to the Regency period and the Georgian Age in 2020. Enjoy planning you Regency year!

END_OF_DOCUMENT_TOKEN_TO_BE_REPLACED

Which topics and anniversaries will be important for Regency Enthusiasts in 2019? This year marks the 200th or 250th anniversary of the following political, scientific and literary events:
END_OF_DOCUMENT_TOKEN_TO_BE_REPLACED

Schedule your Regency year 2019! There are plenty of events related to the Regency period and the Georgian Age to enjoy. I have compiled a selection of more than events announced in Europe, Australia, and the USA. END_OF_DOCUMENT_TOKEN_TO_BE_REPLACED I had the pleasure of perfoming “Ladies, Smugglers and the Glamour of the Ballroom” at the City Library in Nidderau / Germany. The programm is a mix of excerpts from my novel and entertaining information about the Regency Period.

Let me share with you a couple of pictures from a premiere: END_OF_DOCUMENT_TOKEN_TO_BE_REPLACED