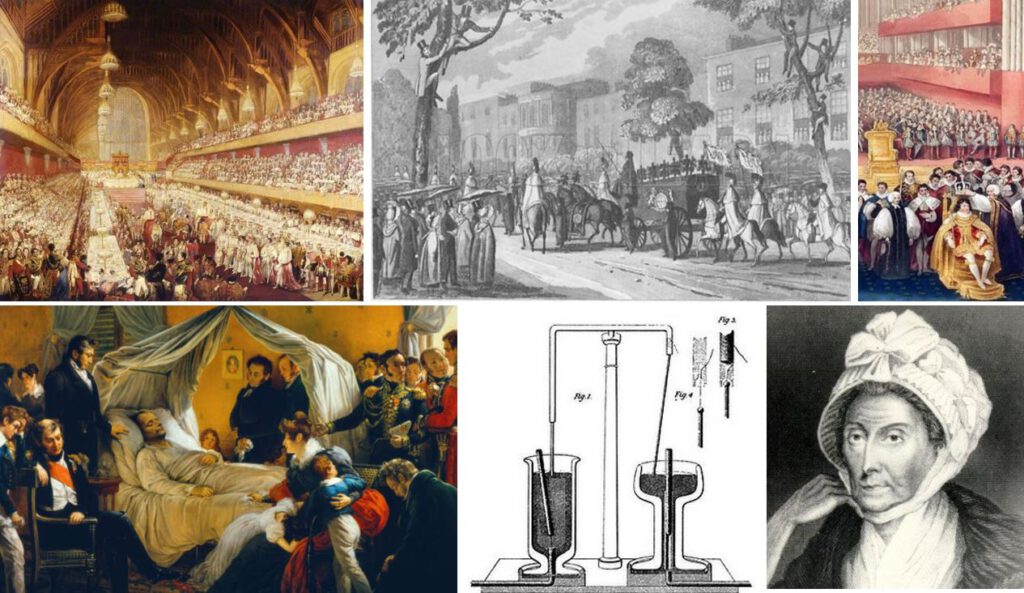 The death of Britain’s archenemy, an extravagant Coronation, and the building of the very first electric motor are among the events of a year still marked by the economic depression after the Napoleonic Wars.
With George IV. ascending the throne, the Regency period comes to an end. The world has changed a lot since he ruled the country as Prince Regent from 1811, and even more since the period’s key-persons were born.
Which political, scientific, social, and literary events and anniversaries are of interest to Regency Enthusiasts in 2021? Have a look at my list of 21 events of 1821 here: END_OF_DOCUMENT_TOKEN_TO_BE_REPLACED

Which political, scientific, social, and literary events and anniversaries are of interest to Regency Enthusiasts in 2020? Have a look at my list of 20 events of 1820 here: END_OF_DOCUMENT_TOKEN_TO_BE_REPLACED

If you were a time traveller in 1820 longing for a good read, what would be your options?
Check out the list of popular fiction releases, and the latest findings from science, travel, and philosophy on the non-fiction book shelf!
I have added links to online versions of each book, so you can actually read like its 1820:

END_OF_DOCUMENT_TOKEN_TO_BE_REPLACED

The year 2020 brings anniversaries of iconic persons of the Regency period. We will, e.g., remember the 200th anniversary of the death of the scientist Jospeh Banks and the 250th anniversary of the birth of the poet William Wordsworth. Accordingly, publishers will regale us with new biographies. But there is more to look forward to in 2020. Have a look at the non-fictions books about the Georgian Age already scheduled for 2020:

END_OF_DOCUMENT_TOKEN_TO_BE_REPLACED

After a ball at the Dolphin Hotel in Southampton in December 1808, Jane Austen – proficient as ever in summing up a gentleman’s potential as a spouse – noted that Corbet James D’Auvergne was both a captain in the Royal Navy and a ship owner. The remark might have been a joke about husband-hunting, but the Captain was indeed a good catch for a lady looking for hero-material in her husband. Besides, he was still single. Any lady furthering her acquaintance with him should know, however, that he had his hands in large-scale smuggling.
END_OF_DOCUMENT_TOKEN_TO_BE_REPLACED

The story of Kaspar Hauser, a ‘feral child’, who claimed to have lived in isolation and captivity, has all ingredients of a novel of Mrs. Radcliffe: political intrigue, espionage, and conspiracy theories. But what has the English aristocrat, Philip Henry Lord Stanhope, 4. Earl Stanhope (1781-1855), to do with the young man, his secret and his death? END_OF_DOCUMENT_TOKEN_TO_BE_REPLACED

For persons interested in small arms, the 18th century has much to offer. Small arms were common in the army, but also in the everyday life of the rich, be it for sports, hunting or self-defence. Thus, gun-makers produced fascinating pieces for their clients. Find here three unusual small arms with interesting features. END_OF_DOCUMENT_TOKEN_TO_BE_REPLACED These gowns were called robes – after the French word for dress, as France was the center of fashion in these days. END_OF_DOCUMENT_TOKEN_TO_BE_REPLACED